How often do you hear someone using the word ‘immersion’ or saying that something is ‘immersive’? The term is widely used in everyday language and professional discussion, as well as in the academic literature. However, many times it is not clearly defined.

Research of virtual technologies and digital games has made some effort in this regard. One of the main definitions here is that immersion is an objective, quantifiable characterization of a technology. The measured qualities are based on displays being: “extensive, surrounding, inclusive, vivid and matching” (Slater et al. 1995).

Another prevalent approach sees immersion as a subjective psychological experience, but the exact meaning of that has been discussed over the years. The early research suggested that immersion is a psychological state reached when the technology of virtual environments is used, and the environments are experienced. The state of immersion requires a virtual environment that provides a flow of stimuli and experiences, and the user is interacting, included, and enveloped by it.

Many researchers have argued that immersion is a natural human state that is not dependent on technology. It can be gained by reading a book, listening to a story or other engrossing activity. It means to be involved physically, mentally, and emotionally.

The predominant definition for immersion in digital game literature is that it is a gradated psychological process that has three levels: Engagement, Engrossment, and Total Immersion. “Presence” and “flow” are often interpreted to be the same as immersion, but digital games researchers highlight that they are optimum stages of engagement, and immersion is a sub-optimal process of becoming engaged in the experience. As immersion is mostly seen as a positive thing and something to achieve, research in the field has also developed instruments for measuring it. Several questionnaires have been developed and validated for different uses. One of them is the Augmented Reality Immersion (ARI) Questionnaire that is designed for measuring the feeling of immersion in location-aware AR experiences.

In my thesis, this questionnaire was used to measure the level of immersion achieved in the City Stories pilot. The pilot was produced during winter and spring 2018, and it contained five Augmented Reality stories located around Helsinki. The concept was created by scriptwriter-director Heli Lekka, and was inspired by the Moth, a storytelling club where people tell true stories on stage. In the City Stories, storytellers appeared virtually in the various locations to tell their tale. The pilot project and the study was funded by the Media Industry Research Foundation of Finland and was done in co-operation with the City of Helsinki. 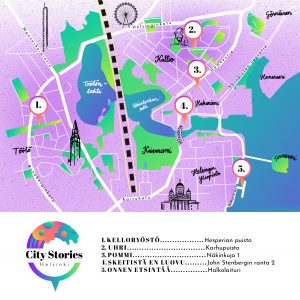 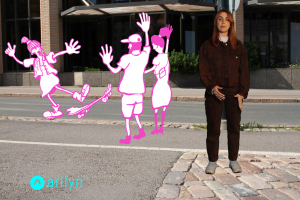 The primary goal was to find out if the location-based Augmented Reality experience City Stories and similar concepts would be worth developing further mostly from the immersion point of view. In addition to the ARI questionnaire, two open-ended questions were added. The questionnaire was conducted with participants who watched the AR experience at the location and also with participants who only listened to it at the location. Both answer batches were positive. The qualitative information supports the conclusion that the concept is viable and worth developing further.

However, the theory of immersion that the ARI Questionnaire is based on has already been questioned. It has been argued that even if immersion was not the same as flow and/or presence, it cannot be measured. It would require neuroscientific research to recognize univocally that immersion is separate to flow and to extract them from each other. It would clarify the taxonomy that at the moment is very dispersed. Neuroscientific research could also answer the question as to whether immersion really should be the aim of media experiences, as well as how better to measure it. The Media Industry would greatly benefit from a tool that is more reliable in order to better manage the design process.

Michailidis, Lazaros; Balaquer_Ballester, Emil & He, Xun. 2018, Flow and Immersion in Video Games: The Aftermath of a Conceptual Challenge.  Frontiers in psychology, Vol. 9, pp. 1-8. Available from: https://www.ncbi.nlm.nih.gov/pmc/articles/PMC6134042/

The full thesis may be downloaded from Theseus.fi (External link) from June 2019.

Are you looking for tools to manage the rapidly changing media industry? Or do you find yourself in the media industry struggling to see the bigger picture? Learn more about our MA in Media Management here: https://www.arcada.fi/en/master/media-management  (External link)