The NAMM Show, annually held in the Convention Center in Anaheim, California, is often described as the “the world’s largest trade-only event for the music products, pro audio and event tech industry”. The event, which spans over four days, combines trade show, lectures, panel discussions and concerts. With an attendance of over 100,000 (a record busting 115,085 people in 2018), it is literary the meeting place for the world of professional audio and music.

My 2019 experience started with a panel on studio design: the participants looked at the designs of what is becoming more and more the norm in today’s audio industry, smaller sized project studios and editing suites. The panel included Eddie Veale (studio designs for John Lennon and George Harrison etc.), Fran Manzella (studio designs for Solid State Logic, FOX, CNBC, NBC etc.) and Carl Tatz (studio designer and inventor of PhantomFocus™). The participants described and presented their favorite design projects, discussed room size, different acoustic elements and all agreed that the most common mistakes in studio designs happen in the bass frequency treatment. Most people have too many bass traps, and/or soundproof the walls correctly but install a door that’s not of adequate quality that lets all the bass frequencies leak out and escape.

This was followed by a panel arranged by Guitar World magazine, hosted by journalist and singer-songwriter Laura B. Whitmore. Discussing the future of the guitar, with music right now being very electronic- and software-based, the panel looked into the developments going on in the industry and predictions about what’s to come on the guitar market. They concluded that while the guitar is facing challenges as electronic music genres are gaining popularity, it’s just a trend, not a threat to the instrument itself. What will change and is changing is the technology around the instrument, many guitar players today have never owned an amplifier and might never own one as emulating software and integration with the computer becomes faster, better and more seamless. Other examples are the use of new materials, like titanium, help achieve better sustain and tone as well as creating perfectly intonated instruments via the True Temperament fretting system.

During the afternoon I found time to walk around a smaller portion of the fair and attended an interesting lecture by Jonathan Wyner, Associate Professor in the Music Production and Engineering Department at Berklee College of Music, owner of M Works Mastering Studio in Cambridge, Massachusetts as well as Education Director at the company Izotope. Wyner has throughout his career worked with among others David Bowie, Aerosmith, Pink Floyd, Cream, Miles Davis etc. Speaking to  ‘Music, Mastering and Loudness: Tips for Making Masters That Translate’, Wyner touched on subjects such as micro- and macro-dynamics,  tonal balance and median frequency response in different genres, equalization, loudness and limiting as well as talked a bit of iZotope’s plugins and tools. 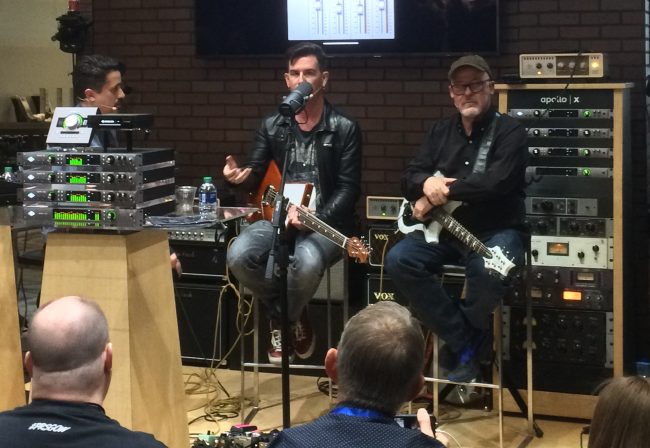 The second day started off with a lecture on Music for Film by New York City film and TV composer and Manhattan Producers Alliance Vice President, Frank Ferrucci. Ferrucci talked about the working relation between the composer and the director, how and where one might need to compromise, how he does a spotting session, how and where what kind of music might be fitting, the power it has to affects the mood, tension and story of the film.

As I walked around the booth area on the third morning it pleased me to see that the Audinate Dante system, that we chose for Arcada’s sound studio several years back for working with audio over ethernet, gathered a lot of attention and is in fact the system that has now been adopted by more or less all leading manufactures. A sign saying ”Dante Spoken Here” could be found at most major brands booths. 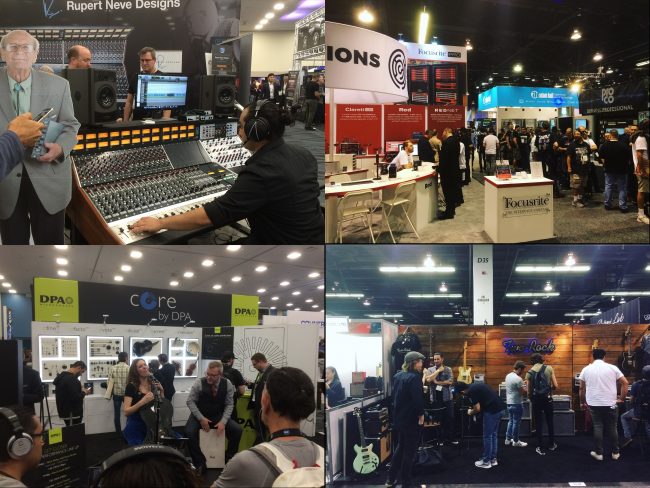 Later in the afternoon I sat down at the Mix with the Masters booth, a company which provides online lectures and seminars by the world’s top engineers and producers. Audio Engineer Bernie Grundman, one of the most prominent names when it comes to audio mastering was giving a lecture here. His studio, which opened in 1983, has an astonishing track record. To give you an example, a total of 32 projects that were nominated for the 2015 Grammy Awards were mastered at Bernie Grundman Mastering in Hollywood. Grundman talked about the difference in mixing and mastering now and then. How, even if the pro audio business still tend to prefer analog equipment, the digitalization is becoming better and better and is gaining ground. He talked about working on Michael Jackson’s Thriller, playing us the mix and the mastered versions and letting us in on how he worked on that track.  During his hour-long lecture he mentioned something that stuck with me that I’ve shared with our students over the last few weeks:

All processing you do to a recorded signal is a degradation in quality and an alteration of the true capture of the performance. But even if it’s a degradation, if it adds to the musical experience of the listener then it’s a good thing and the processing is motivated.

Bernie Grundman, an icon in the music industry who among other things did the final touches to Michael Jacksons smash hit ‘Thriller’.

On the last day, I had my first panel, moderated by Chandra Lynn the title was Crafting a Hit. Two songwriters, Mischke (Songwriter, Producer and Vocal Producer who has worked with among others Michael Jackson, Britney Spears, Gwen Stefani, JLo) and new and upcoming Bava (who co-wrote DJ Snake’s mega hit ‘Taki Taki’) discussed whether it’s possible to intentionally write a hit song, how to become a successful songwriter and how to approach writing. Mischke made an interesting observation worth sharing:

Imagine the industry is like a long line, you stand in the line and every day some people in front of you fall off saying I quit, I just can’t take it anymore… and they head off in another direction, doing something else in their lives.

But for everyone who persistently stand there, the day when you’re first in line will come, and that’s your chance to prove yourself and prove that you’re ready.  Everyone who stands there will get that chance, but when it comes you have to be ready.

And you become ready by putting in those 10.000+ hours of practicing, studying, learning by doing, getting to know people, learning to write songs, learning to record, edit, produce, learning Pro Tools…

I will let that thought linger….