Nathalie Hyde-Clarke (PhD), Head of the Department of Culture and Media, Arcada UAS

Social impact is understood to be the influence and effect an organisation has on the well-being and development of its community. It can be measured in a variety of ways. For the purposes of this discussion on the effect of the BA in Film och Media (previously Mediekultur) offered by Arcada in the Finlandsvensk community, we focus on the positioning of change agents in key roles who are able to enact positive outcomes – as well as the ability to play a transformational role at a grassroots level. In our case, the agents are our staff and alumni, and that ability is achieved through the competencies gained in the learning experience we offer in the aforementioned programme.

On 3 December 2019, just over 100 of the top names in Finlandsvensk film gathered at Korjaamo to discuss current challenges and future trends in the industry. Within the first ten minutes, it started to become clear that our BA medianom at Arcada has had, and continues to have, a positive social impact in this profession.

The opening speaker, Klaus Härö (a leading director), made almost immediate reference to two of our staff as being exceptional in their specialisations: Robert Nordström (cinematography); and Klaus Lindfors (editing and sound). Our Degree Programme Director for Film och Media, Fred Nordström, was introduced shortly thereafter as someone with a ‘most important’ position in Finlandsvenskt film today – providing public acknowledgement of the relevance and need for our education. 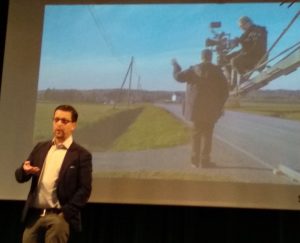 Of the 100 in attendance, eight were staff – recognised in this circle for their professional roles as well as their educational ones – and as the day progressed, as many as 80% of those in attendance would admit that they were in some way connected either to the people or to the programme at Arcada. This was most obvious in the panel discussions. The first included young and up-and-coming producers, directors and scriptwriters who discussed trends and changes in the field. The second included those who are established and known for their work. Of these six participants, three are our alumni and one is a regular guest lecturer. 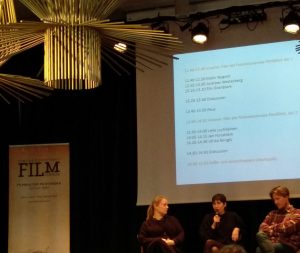 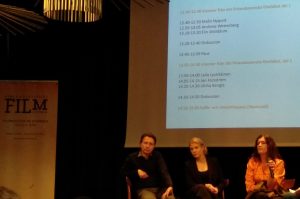 Notably all are female – in an industry known to be male-dominated in the past – and all three incorporated the need for real transformation in their comments. It was not lost on the audience that each firmly represented the transformation of the field through education. It was also striking that all advocated the need for education and continuous learning. Two alumni discussed the importance that constructive and experimental learning environments have for those entering the field. Aside from personal development, the networks gained through university were also instrumental in building their portfolios and profiles after graduation.

Unfortunately, recent budget cuts in the educational sector by the Finnish government have been most felt in the cultural field. The medianom degree is currently placed in category 1, with the lowest subsidy co-efficient. This affects how we finance our production space. More emphasis is placed on the need to raise external funds to support what was previously accepted as ‘normal’ teaching costs. This comes at the same time when statistics provided by Annika Sucksdorff, Head of Production at SF Studios, show the number of cinema viewers for nationally produced films is decreasing in the Nordic region. More people are turning to streaming services for their entertainment needs. The combination means that competences and skills must be updated and in some cases repurposed for new platforms and patterns of consumption. Once again, Arcada came to the fore as one of our alumni, Kaya Pakaslahti ‘s thesis work, Badrumsliv, has recently been produced by Moilo and three Nordic broadcasters, and distributed through Yle Arenan. It is also accessible on similar streaming platforms in Norway and Denmark. Badrumsliv is a 18-episode web series, and is proving to be a popular online choice for a broad viewing audience. Our scriptwriting teacher, Jan Nåls, worked as a script editor for the series. It is apparent that this approach should be incorporated more fully in our educational package so that alumni are suitably prepared.

All in all, the event was a wonderful way to assess our past and current social impact. It also served as a good reminder that our education must remain flexible, experimental and open to innovation.

Here are a few ‘take aways’ from the seminar for those entering the field: 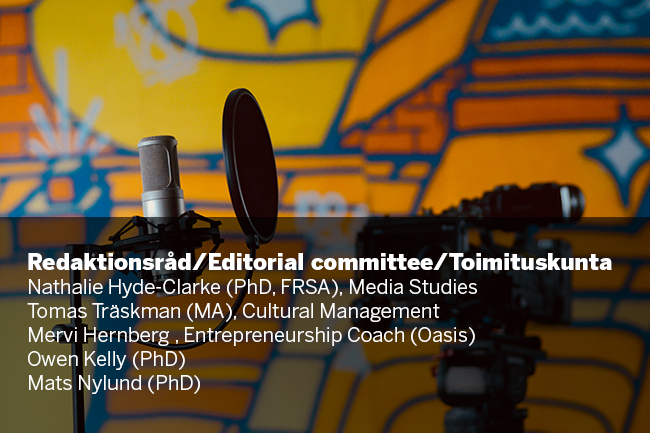