What is slush? Slush is a technology and entrepreneurial event that happens every year in the late fall in Helsinki. There are approximately 15,000 attendees, 1700 start up companies and 800 investors. During this two day event Startups have a chance to pitch their idea towards potential investors and industry leaders give key note speeches. It is two days that you will never forget.

On a rainy and wet wednesday in the mid of November slush had began. As everyone was rushing to enter into the venue I was waiting for the rest of my team. I started to ponder, what will I see here what kind of experience will I have. Soon enough Alex and Emine joined me at the entrance of slush. As we entered the venue as a team we knew something extraordinary was about to happen.  With loads of people coming in we quickly showed our badges and were ushered into the venue hall. Our first thought was this is huge.

We walk towards the main stage where everyone was gathering to watch the opening remarks. On our way we stopped at the Hollande Café and got our first free coffee of the event. We quickly found seats on the far right of the main stage.  A DJ had come on to hype up the crowd. It was only 10 am and everyone was already very energetic. Once the DJ had finished it had started. People all around us had already taken out their phones tweeting and taking photos.

When the opening remarks had finished we decided to walk around and look at the venue. There were many stands and demos set up for us to experience new technology. The one stand that peaked our interest the most was the Nokia stand. They had velvet ropes and bodyguards at the entrance into their area. Alex immediately knew what was inside, Nokia’s new 360 degree view camera OZO. The OZO is a start of the art camera that allows for filmmakers to have many different angles of one shot. We entered into the Nokia booth. All of us were fascinated of the technology we were looking at.  We saw that Nokia had set up demos of their Virtual Reality headsets as well. We quickly lined up to try them out. The VR is extraordinary, you feel as if you are inside the simulation itself.

Next up on the main stage was Marcus Wallenburg from SEB and Risto Siilasmaa from Nokia on the main stage to give a key note speech. They both gave excellent insight into what has been going on in Nokia and how to approach the business landscape for new companies and startups. Some of the key points he mentioned is to look at business as a long term endeavor and to never be satisfied with what you have created instead always look at how to improve it. “Long term is only the addition of many short terms.”

After the exhilarating talk from Nokia we found ourselves hungry. We looked in the slush 2015 app on our phones and decided upon a place to eat. We chose Papaya Thai. It was a long line up but it was worth it. The food being served at slush was all from food trucks in the main area.

After lunch we found ourselves situated near the pitching stage. We took a seat and watched as many startups tried to wow the crowd. Some of the ideas were excellent and very thought out, having clear business structures and revolutionary products. The pitches we watched inspired us. We continued to walk around the venue until Supercell was giving their keynote speech.

Supercell was joined with their investment partner Index. They proceeded to give a speech on the investments in start up companies and the upmost importance of creating a strong and stable corporate culture. Supercell’s philosophy is to create many products and holding onto only the good ones and know when to accept that a product is a failure. And when a product is a success celebrate it with the team that has created it. Furthermore Supercell had acknowledged that success does not come over night but it takes a lot of hard work to become the leader in an industry.

Supercell’s keynote had created a large impact on us. We took away a lot of excellent information to learn from and to keep us motivated in our field of studies.

The venue started to die down and people began to leave making it easier for us to walk around and interview smaller companies. Our strategy was to find companies that were doing something different. The highlight of the companies we talked to was EntoCube. They were trying to sell crickets as an alternative source of protein. EntoCube gave us a break down of how they manufacture the crickets in the most humane way possible. They also gave us a break down of the issues they have been facing as a company. It was a very interesting interaction.

As the day was winding down, the startups started to pack away their displays and it was our signal to leave. We took a break from focusing on schoolwork and let loose for a bit at Kaiku where the first day after party was held.

Kaiku was packed. When we first arrived the line up was long and cold, but as any good team we waited to get in. Once we entered we gathered as a group with some other students from Arcada to discuss what we saw today and what we were looking forward to the next day. As the night ticked on we decided to call it a night. We knew we had another long day ahead of us the next day.

The Thursday started off rainy and cold, typical Helsinki weather. Slush held the honor to ring the opening bell for the Nasdaq. We met inside Slush this time as everyone arrived at staggered times.

We decided that on the second day we will focus on enjoying the event. We made our way to the main stage to watch a keynote talk from Eric Brewer of Google.

After the keynote from Eric we decided it was lunchtime yet again. Being the savvy and interactive group we were we met up with another group in our class to sit down and do our own networking. Here we were able to connect with each other and discuss more ideas of what we have seen.

The main part of slush was coming to an end. After lunch we went and talked to more startups coming across many that could benefit us as we begin to enter the workforce in the coming years. The most memorable conversation we had was with a very nice lady from Jobspotting (External link). Through her website candidates are able to search for potential employers with more specific information. On jobspotting.com you enter in your resume or connect your LinkedIn account and through a complex algorithm Jobspotting will connect you with potential jobs that fit your characteristics. On this site you are able to view the potential employer and learn about their company.

After many long talks with fascinating startups we needed to take a break. So we went to the pitching stage to watch the crowdfunding launches. We watched 7 companies pitch their crowdfunding idea. The most stand out launch was one from UnSeen art. His idea was to create open source data for recreating images in 3d for blind people to touch, feel and experience. He believed in helping the blind see pieces of art that they have heard about before. It was very inspiring.

By the end of the crowdfunding launches we were all exhausted and felt as if it was time to go home and rest before the legendary after party.

As night fell slush turned into a music venue for everyone to gather. They held nine different bands and DJ’s on three different stages. Supercell hosted a virtual reality simulation of their world famous game Clash of Clans. In this simulation you were placed inside of a raid with a 360-degree view of a defending castle. The virtual reality was an excellent way to showcase the work of the game designers and developers. The night carried on with DJ’s and bands playing world-class music and local music. There was no better way to end 2 days of extraordinary experiences from slush 2015. 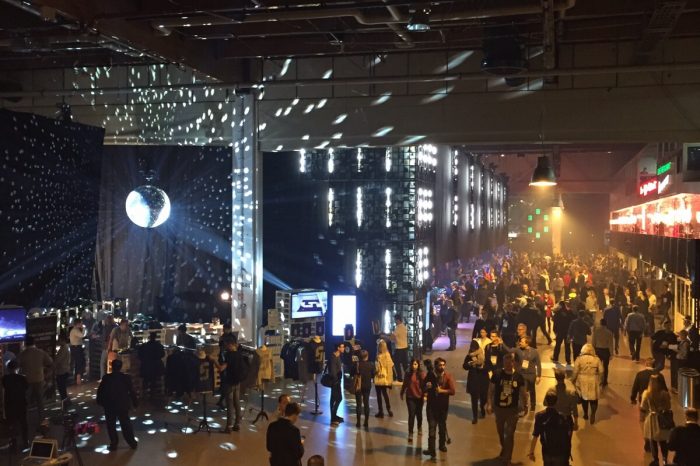