This Thursday, the climbing crew from the Expedition completed what’s most likely Finland’s first Via Ferrata route inside of Arcada by the personell entrance. The 13 meter route is constructed from 23 steps of thick rebar that’s glued into place with a special glue.

The route at Arcada will give us a place not only to physically train for the arduous 300 meter climb but to also train different rope access techniques. It will also give rescue teams a chance to practice different ways of bringing down a patient from the wall.

But what is a Via Ferrata?

Via Ferrata, italian for iron road, is a climbing concept that was developed in Italy during the first world war as a way to easily ferry troops over the alps. After the war, climbing the routes became a popular past time and now you find these routes all over the alps. A Via Ferrata route consists of steps and handholds usually made out of rebar with a steel wire running along side to stop you from falling. When climbing the route you wear a climbing harness and a special Via Ferrata lanyard that you attach to the steel wire and yourself.

Since there aren’t any Via Ferrata routes in Finland, knowledge on how to build one is hard to come by, so we had to do our homework. The International Climbing and Mountaineering Federation (UIAA) publishes various standards relating to climbing. By using them and various other guides and research on climbing anchors and Via Ferrata routes, we decided on how we were going to build the route in Arcada.

No supplies – do it yourself

With no stores that sell ready made pieces for a Via Ferrata route, we really had to start from scratch. Rebar, special bolts, special glue, wire, chain and so forth all had to be found and made sure of that they meet the necessary standards to create a safe route. Finding stores that had materials with the requirements we needed proved to be quite a challenge, but by end of last week we had all the parts together.

We found the rebar we needed and received it already cut into 70cm long pieces but still had to clean them and bend them into the proper shape. This Monday afternoon we went out to Nurmijärvi where expedition member Mika Listala showed us how to heat up and bend the rods using some improvising, lots of precision, and muscle.

The next morning at 8am Pekkaniska brought over one of their lifts to help us build the wall. Construction began by drilling 28mm wide holes ten centimeters into the wall at Arcada to securely anchor the steps. Work continued through the day with many members helping out drilling and glueing. By the end of the day almost all of the steps were in. Eager to have the job done quickly, work continued the following morning at 7 AM with drilling in the final holes for all the bolts to secure the three top rope anchors and the steel wire. By noon on Wednesday the whole route was finished.

Climbing should start next week once the wire is properly tensioned and every bolt tested to make sure it holds. Come check out the route and follow us on Instagram, @ExpeditionArcada (External link) !

Building your own wall?

We used 25mm thick rebar for the handholds, but you might make do with something a little thinner. To bend them we heated them up with a acetyl torch until orange, and with the help of a simple lever bend them by hand and eye to the correct shape. This was much easier than we thought.

For the bolts holding the 8mm wire we used M12 sized forged stainless steel eyebolts placed every two meters, and for the top rope anchors we used Petzl Bat’inox 14mm glue-in anchors and AISI 316 stainless chain & quick links. The steel wire is held in place with wire locks, one at each bolt and three at the top and bottom end.

To hold all of the hardware to the wall we used Sika Anchorfix 2, an industrial strength two-component epoxy glue, meant to glue rebar in concrete. This was slightly difficult to handle as the curing time happens in a matter of minutes so we had to frequently change nozzles as the glue set. We found the best way to work was to first drill and clean out all the holes and then use up a full tube of glue in one go. 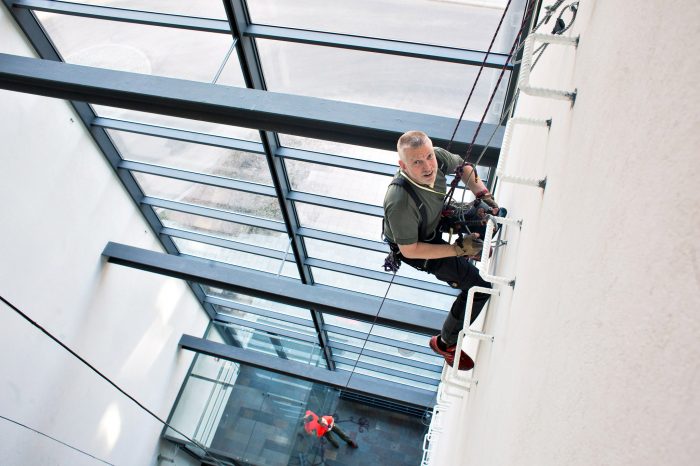