It has taken a while to write this post since we needed a couple of days to process everything that happened during our trip to France, La Grave. And if that wasn’t enough we have hit some minor speedbumps with our internet connection. We hope you can forgive us for this and enjoy this post!

”Ambulance, can you hear me?”, these were the first words that came from the walkie-talkies when 4 students and one teacher from Arcada started their journey from Finland to France, La Grave. Me (Rasmus), Emma, Max, Ludvig and Rudolf had the privilege to transport the needed materials to France with cars and had no idea of what to expect from the trip we were facing.

Destination nr. 1 was Naantali, Finland from where we took a ferry over to Sweden, Kapellskär just a little north of the capital Stockholm.

Early monday morning we started driving south torwards the great Ösresund bridge in Denmark, we were all a bit tired from lack of sleep but filled with positive energy (mabye even a little bit on the hyperactive side), the walkie-talkies shouted back and forth with mindless jokes that there isn’t even any point in trying to explain because they will not make any sense to you readers but we laughed like idiots the whole time.

We didn’t take many brakes but when we did we tried to entertain each others as much as possible and succeeded. We made funny videos and joked around on each others expenses. Gasoline was used and also alot of coffee, and there we were, at Öresund bridge.

This is where the trip really started, the views were so amazing that the only things we could say for the next two hours were ”Woow” and ”Look at that!”. The drive through Denmark was the most rewarding part of the trip. It was like driving in heaven – beautiful flower fields, the wind electricity thingies and the bridges that looked like they were on top of the clouds…

Midnight was closing in on us and we decided to make the final stretch and drive over the border to Germany and then find a place to spend the night. We crossed the border and started driving on the legendary Autobahn, unfortunately it was not like we had imagined, it took 2km until the road constructions started and there was no end to them. Close to 2 at night we stopped at a parking lot for truckers a bit south of Hamburg. Ludvig, Rudolf and Emma slept in the back of the van and Max and I slept in the ambulance.

Next day we all woke up feeling a bit tired and unmotivated because of the bad sleeping conditions but we lit the Trangia up and boiled some water for our coffee, ate our leftover pizza and then it was time to start driving again. After a couple of minutes we found the motivation that we almost lost in the morning and continued driving and joking around like we did the last day. This day we drove, drove and drove. One highway after an other until we got close to the border of France where we stopped to buy some dinner equipment and then we headed to a camping place called Gugel. There we made an amazing avocado pasta with cherry tomatoes and lemon. Then it was time to sleep again. This time Ludvig slept in the van, Max in the Ambulance and I got the best company in a tent, Emma and Rudolf.

Last day and we all just pushed all our negative feelings and fatique under the carpet and put the pedal to the medal. We had about 560 km left to reach our destination and we were determined to drive this part as fast as possible, oh how wrong we were…

The last 50 km of our trip was a drive through small and winding roads up through the mountains. Me and Emma were in the ambulance and when we had about 25 km left we were so happy and proud that we high-fived and said ”We finally made it!”. About two minutes later we came to a stop, the road was closed because of an avalanche threat. All the cheers and laughs changed to miserable frowns, but only for a minute or two. Then we decided that there is no point to whine and cry about this obstacle so we went mental, in a good way. We ran around in circles and did cartwheels and all kinds of crazy stuff to try to ignore the fact that our trip just got alot longer than expected. Ludvig started looking at the map to find an alternative route to La Grave. The only way to get there at this point was to drive through Italy. We decided to make the most of it and drive there and eat a Prosciutto pizza and then drive back to France. So that’s what we did.

At last, we made it to our destination. We were tired but at the same time so proud and happy that we made it! We had a really warm welcoming from the other team members who had arrived there just a couple of huors before us, eventhough they hadn’t eaten anything because we had all the food in our cars. This was the end to an amazing journey that we will never forget, but the beginning to another adventure that we can guarantee will be even more exciting, Expedition Arcada. 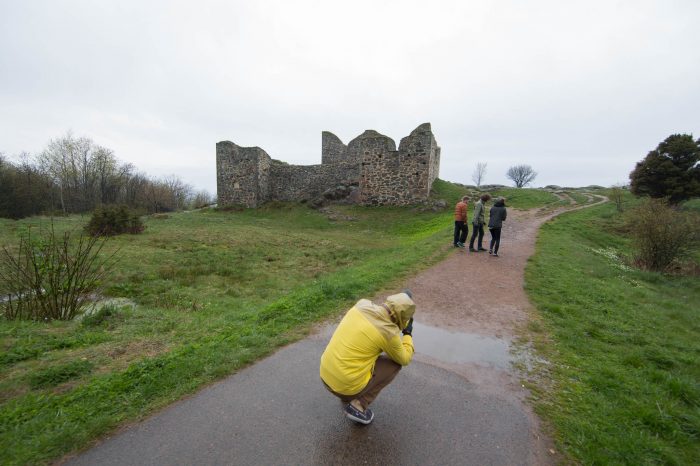