Yesterday we had an exciting morning with Ted Urho from Yle-Radio Vega. A small group of members from the expedition and Pata came early to Arcada to be interviewed by Ted, who did a live broadcast for the morningshow ”Morgonöppet”. When Ted arrived we had not much time left before we would go live. We decided to put Ted up on the Via Ferrata so he could do the interview both from the floor and the wall. Fast and safely we got the climbing equipment on a well prepared Ted, after that it was all action, – Up and go!

After the live stream Ted decided to climb the whole via ferrata, which is 13 meters high. This was the first time Ted climbed on a via ferrata, and he was very good at it, though he is afraid of heights. Go check out the video of his climb with Pata here: http://areena.yle.fi/tv/2747855 (External link)

The day continued with more climbing training with the expedition participants!
The article, pictures and the broadcast can be found here, on Svenska Yle. (External link)

Over and out for now!
/Emma, cultural management student in charge of the media communication in Expedition Arcada 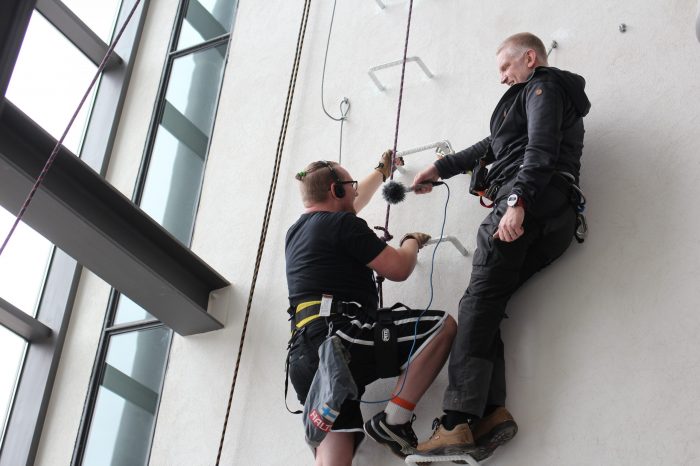