Ladies first! An introduction to our first panelist:

Elina Uutela is the student captain of Helsinki Think Company (External link). She is studying Communications at the Helsinki University. She is the former President of the Aaltoes board during 2013 and has been responsible of various tasks at Slush (External link). Elina was co-hosting Tulevaisuuden Suomi with Kasper Suomalainen (President of Aaltoes) in October 2014, it will be interesting to see them back on a stage together again.

She’s a “gal” with her roots in Lapland and a home in Helsinki, equipped with entrepreneurial mindset and urge to learn. While studying and working with different projects, she hopes to combine her interest towards technology, education, society and communication to something cool – and useful.

She strongly believes that the world won’t be changed via stiff structures, but it has been and will be changed via entrepreneurship. She values equality and want to make things that have a positive effect on people’s lives.

She has lead projects, created content, done design, tried lobbying, noticed that politics ain’t her cup of tea and – above all – she has had the chance to work with inspiring people from whom she’s learned a lot. In the future she will always try to surround herself with people smarter than her. 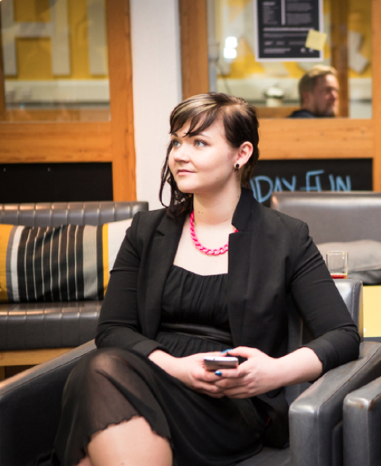