After a super day one in Tallinn, we welcomed day two with open minds.. We ate our breakfast at our flats in old town and headed out for our first appointment for the day at the company called Toggl (External link), which is a popular time management tool.

Liisa from Toggl opened the door to the office with quite a surprise as we were more than she thought, but she was a real warm person and did take it as a positive thing. She gave as a little tour around the cool office which seemed newly renovated, it located in the 8th floor of a house that looked like an abandoned one from outside. Then we sat comfortably on a few couches, and started talking really casually, the atmosphere was really great and the meeting got even more fun when Alari, the CEO of Toggl joined us. He told us a lot about the history of the company and what challenges it have to tackle right now. Toggl had a really big office but only about four people were present there, Liisa told us that it doesn’t get more crowded than that even though the company has 40 hired workers. And the reason for this is that Toggl really believes in this new way of working where time and space doesn’t have the same meaning than before, they told us that they have workers working from Thailand, Brazil and USA, team meetings and other interactions are done through the internet. They actually meet only twice during the year in real life, as they call it, overall we all learned a lot from Toggl, and got inspired by their confidence in the new way of working.

After Toggl, we took the elevator down to the first floor and walked across the street to a co-working space called Garage48 (External link). Jane from Garage48 took us around and told us about the birth of Garage48, the name of the place originates from a hackathon that lasts for 48h, the hackathon is actually taking place even today twice a year. At the place we met a guy named Ottavio that was working on a startup that makes these really innovating and hip music machines (External link), which anybody can play with, you might see one of these at our birthday party the 26th of November. We all got really inspired by the co-working space, it was definitely the coolest co-working space that we have witnessed, everything in it just gave you a mind flow that startups really enjoy I bet.

These two visits in the morning really hyped us up, and the only thing we thought about was new inspiring visits, besides lunch of course. We enjoyed our lunch at a Japanese Cuisine and headed fully energized towards our next meetup at the Estonian Entrepreneurship University of Applied Sciences (External link) which is a privately owned University with kind of a niche variety of fields to study, but with a great focus on quality. Kristjan from the university gave us a really thorough story about the history of the school with goes all the way back to the soviet era. After the formal introduction of the school we got into an auditorium and just talked our visions and thoughts about the schooling system today, and we all shared this one idea that goes like this, “a student should be guaranteed to learn more during a school day than the student could learn by watching youtube at home”. The business world isn’t the only field that is changing, the digitalization brings new challenges for universities to create new ways of interacting with pupils, and it seemed like this university really was heading towards this new world of teaching.

The university visit was the last confirmed visit we had in Tallinn, but earlier we had tried to get an appointment at one of the biggest Estonian company TransferWise (External link), and they actually called us from the office and agreed to meet us. A few of us knew the company, but all of us got fairly surprised by the size of the company, the office in Tallinn consisted of 370 workers, and they had big offices in Florida, Ukraine and London too. Richard Branson is one of the investors in the company, and the owners of the company are the first two persons in Estonia that have become the richest in the country, not by privatization but by privately owned business. The idea behind TranswerWise is obviously to transfer money, but TransferWise is doing this really cheap, because sometimes when you for example transfer currency in the UK, the fee of the change can go up to 10% of the total money changed. TransferWise can do this really cheaply because the money they transfer really don’t cross country borders because they have bank accounts around the world, and if person X want dollars and the person Y wants euros TransferWise will find people that is looking for the transfer in the same country, because apparently there is always people in need of changing. We also got to know about the company’s history which really doesn’t go long back, the service was launched in 2011, so 4 years ago, and now it employs more than 450 people worldwide, quite the success story from Estonia.

After all the visits we couldn’t believe that we actually had time for this much inspiration in one day, with all this new knowledge we decided to have a toast and celebrate the trip and gather our thoughts together with the amazing people in our team. 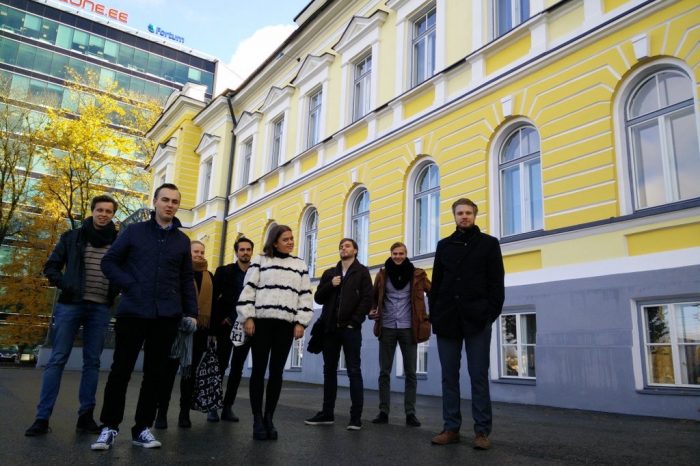