The event took place an hour away from Moscow in a place called Skolkovo, which has been under an enormous reconstruction because they’ve been building an innovation center which will be spread around a 400 hectare area. The actual event venue was outdoors in a village like area with a small pond around it, which was super cool because the weather treated us well and what’s better than being outside in the sunshine and enjoying of the energy and enthusiasm of tech minded people.

The event started with a panel discussion with the topic investment trends in Europe, and it was moderated by Marianne Vikkula, the CEO of Slush. After that it was time for the opening show of the event which was followed up with a panel discussion about the 4th industrial revolution, where topics like robotics, nanotechnology and block-chain technology was discussed. One of the panelists threw an interesting opinion on how block-chain technology could be the end of companies providing Uber like services.

With both Rasmus and Tinja being in Russia for the first time they both were extremely surprised of the high quality of technology at the event, if you should find one difference from Slush it’s definitely that the Russian technology startups were more focused in the science part of the projects when in Slush the technology startups have a consumer focus from the beginning to the end. Furthermore it was interesting to see that Startup Village had a whole additional program focusing on Art & Science. Collaborations between the artist’s creative and questioning mind and the innovative scientist is a quite obvious pair when you think about it, but maybe not that outspoken in Finland just yet. The event had many different areas and one of the coolest ones were the VR/AR (virtual reality/augmented reality) area, which had tons of different games and worlds you could explore together with virtual reality glasses, both of us were feeling sick after being thrown around in roller coasters and magic forests, but it was all worth it.

The second day started early with a Finnish-Russian business breakfast. At the breakfast we had the opportunity to get to know people from different organisations and we got to hear more about a few Russian startups in a form of a sales pitch which Pekka Viljakainen from Skolkovo Innovation Center (External link) had picked up. The food was tremendously good and all the people were in a cheerful mood, after the breakfast we headed out to Startup Village where we continued our exploring in the russian startup scene.

Since Tinja studies sports and health promotion, the discussion about “Ageing and regenerative medicine” was a doubtless choice. The session had a clear outspoken statement; “Ageing is a disease, we have to fight it.”, and included a lot of panelists who presented researches and ideas about how to remove the ageing gene, bio-printing of organs and so on. Very many interesting points and ideas about how to combat ageing in the future were discussed. For example one insight in the future of beauty and health was an app that with an artificial intelligence algorithm calculates a person’s beauty from a regular selfie.  Calculating beauty out of an selfie can seem like an odd idea, and even more so taking part of the beauty contest judged by robots that calculates the wrinkles you have on your face (which surprisingly many people are going to take part of in the upcoming autumn). Ultimately learning about how the app is creating more consumer friendly ways to figure out your health from your face and choosing the right clinical treatment for your skin, is in my opinion the feature with most potential for future research in self-learning systems.

A quick last late lunch at Innovestors lounge, and we sat down in the bus that would take us to the airport. Based on what we heard and had seen on Startup Village, the future is going be bright since we’ll have an ageless, healthy and wrinkleless society runned by robots and artificial intelligence. Startup Village sure gave us new scientific insights in what both big companies are heading and startups are working on, many interesting discussions and a bunch of new ideas. With this said, a big thank you for a great experience to everyone that made it happen!

Enjoy your summer folks, see you in the fall!! 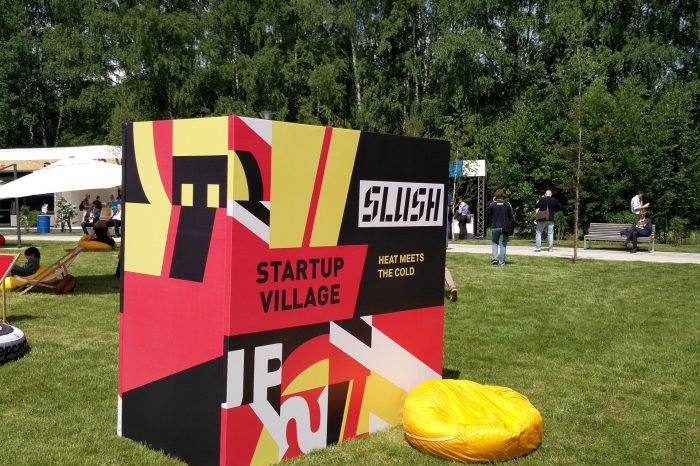