All might appear calm on the AES front, but if you’ve been following us on Instagram or Twitter you’ve seen that we’ve been quite busy behind the scenes planning & creating this year. The past week in particular has been spectacularly crazy, we’ve been to Mikkeli; visited the U.S. Embassy and AaltoES, and have had our own planning day at the COR-house.

On Friday the 23rd me, Alexander & Anna left Helsinki for MikkeliES’s annual Ice Breaker Event. This year was the biggest one yet with at least three people from twelve different Entrepreneurship Societies from all over Finland gathering together at a cabin outside of Mikkeli for the whole weekend. The idea is for us all to meet each other and network. We discussed all manner of things from our successes to our failures, the problems encountered and how we solved them. A large part of the discussions this year was on collaboration. Up until last year most ES’s have been doing their own thing in their own corner with very few events arranged by two or more ES’s. We were all in agreement that this should change, that we should gather our resources to create bigger and better events. For us in the Helsinki region we’ve got several great opportunities for collaboration, as there are now six working ES’s (AES, AaltoES, Helsinki Think Company, HankenES, LaureaES & MetropoliaES). After the weekend we were left with a lot of great advice, several leads for collaboration and meetings scheduled with LaureaES and HankenES to talk about shared events.

On Wednesday we helped Arcada arrange a visit to the U.S. Embassy here in Helsinki together with the Entrepreneurship course offered at the University. Since last April when we were invited to the Embassy on Vappu we’ve had a good relationship with the people working there. It was great to see them again and help get the entrepreneurship students an international perspective on the subject.

Later the same day AaltoES held their first major event of the year where Marc Dillon, COO of Jolla, came over and shared his wisdoms about creating your own thing. That was definitely one of the better talks I’ve heard during my time in the ES community. He structured the whole thing around asking us, the audience, questions like What is talent? What motivates you? & What’s your bugs? The whole talk became very personal and intimate and I think everyone in the audience walked out having grown a little inside.

Yesterday on Sunday AES had our own internal planning day, to me it felt that it came a little late in the year but in hindsight it was extremely good that we held it after the MikkeliES weekend. Now we could take all of our new-found knowledge and friends into account when planning what we want to arrange this year.

During the day everyone gathered their ideas on small cards and just before dinner each person got two minutes to pitch their idea followed by one minute of group discussion around the idea. We then voted on whether or not the idea was something we wanted to create. We ended up with a list of 22 raw ideas (External link) for events or events series that we could arrange this year. I was incredibly impressed with how much we came up with!

This Thursday, the 5th of February, we’re hosting our next open team meeting at 4pm at the COR-house. (External link)  At the meeting we’re going to build up small working groups around the event ideas that YOU find most interesting (External link). These groups will then start to independently plan the events.

AES is all about the people, without whom we wouldn’t exist. If you want to help make this year AESome then come to the Cor-house this Thursday at 4pm. Everyone’s welcome!

Stay tuned for info about our biggest AESbreaker with the best lineup yet! 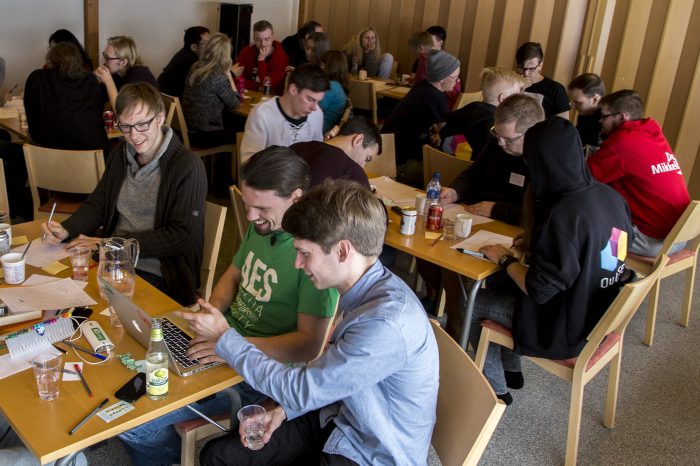