If a beautiful Helsinki afternoon wasn’t enough to put a smile on Suman Thapa’s face today, receiving the prize after winning Inside Arcada’s “Bucket list competition” sure did the trick. Late last night (midnight to be precise) the competition closed and a brand new iPad mini found it’s way to Suman.

A quick recap for you who missed the competition – Arcada students were challenged to write a list of three things they want to experience or accomplish before graduating. The list that snagged the highest amount of Facebook likes would be rewarded with an Apple-shaped package. The original blog post can be found here.

Said and done, International Business student Suman Thapa’s entry generated a massive 205 likes. This from a guy that says he wasn’t even that serious about the competition to begin with. “I thought I could amuse myself for a few minutes,” he comments when asked about his list. “And I’m lucky to have the support of great friends,” he adds.

We wish Nepalese Suman the best of luck with keeping his languages straight. We also hope that he gets to actually see his new iPad once in a while. His Finnish girlfriend, a graphical designer who does the layout for iPad magazines, might have other plans.

Finally, a round of applause to all of you who submitted your bucket lists! It’s been great fun following the contest up close. The blog post where the competition was held generated more than 800 Facebook likes by itself, so you can rest assured that there are more competitions to come. 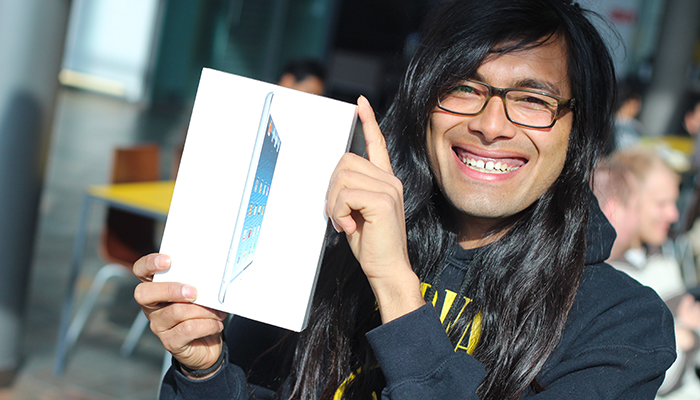