On the last of August more than 300 people gathered to celebrate the opening of Arcada’s twenty-second academic year. This year’s celebration was even more heartfelt than usual, since it signals both the end of an era and new beginnings. After 23 years as rector, it was now time for Henrik Wolf to welcome new students, tutors, the boards of the student associations, staff and invited guests for the last time. Also invited was Arcada’s new rector Mona Forsskåhl, who got to experience her first opening of the Academic year at Arcada.

As is customary the ceremony opened with the Arcada fanfare and a greeting from the chairman of the board, Arne Wessberg. Then it was Henrik Wolff’s turn to take the stage and open the academic year of 2017–2018. In his speech he emphasized the importance of high-quality education, research and innovation in our ever-changing society. Wolff also spoke of how studying represents the first step into adulthood for many – a time when you learn about independence, fellowship and responsibilities. “The more you do, the more you get done”, Henrik concluded.

This year’s celebratory speech was held by the mayor of Helsinki, Jan Vapaavuori, who spoke of Helsinki as a place to study. Vapaavuori pointed out how important students are for a city’s attractiveness and vitality, and he also underscored the importance of co-operations between Helsinki and the educational sector.

ASK’s chairperson Annika Eskman greeted the new students on behalf of the student union, and she focused on how Arcada has given her the professional know-how, curiosity and the confidence to embrace working life. In between speeches Akademen sang, and producing-student Daniela Holm from 100 min 100 år presented last spring’s big co-operation project within the Degree Programme in Media Culture.

After the opening ceremony in the auditorium the celebration continued on the Big square with food and drinks. It was inspiring to see how both new and old acquaintances filled the square with conversation and laughter – after a few quiet summer months the Arcada building is finally brimming with life again!

If you are curious about the speeches you can find them here (in Swedish):

We wish to thank everyone for a lovely celebration and wish you all a fantastic new academic year! 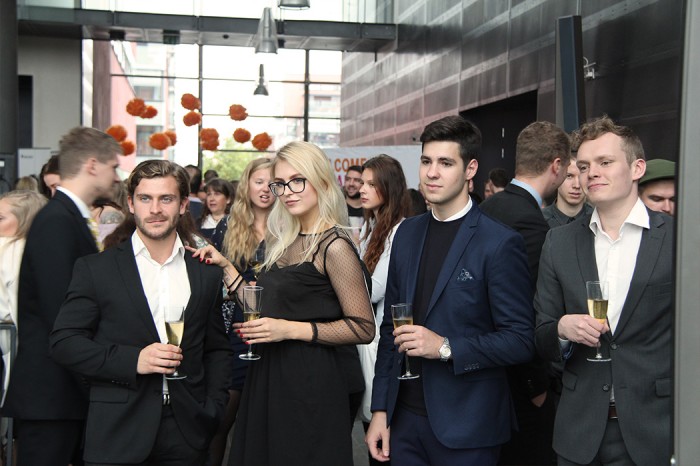